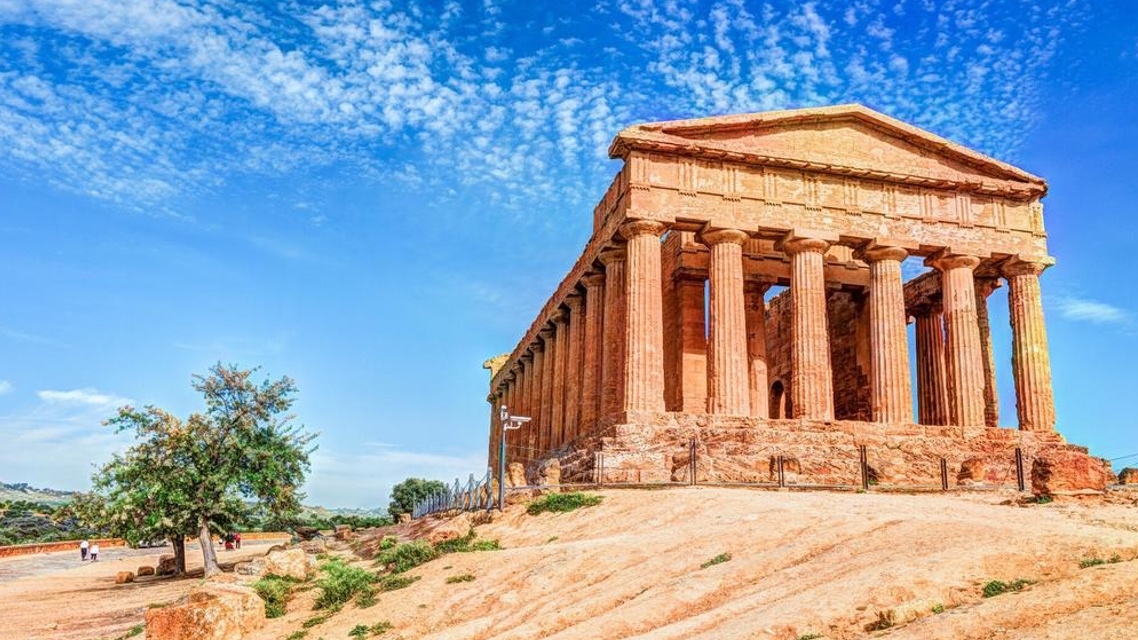 Built on a cliff on the south coast of Sicily, Agrigento is an ancient Greek city, which also carries the names of Agrigentum, Acragas or Akragas. Being surrounded by two rivers called the Hypsas and Akragas made it easier to defend the city in war time.Today, the town is located 230 miles above sea level on a hill which runs parallel to the Ionian coast. The remains of the old city still has a medieval structure with steep narrow winding streets, an extraordinary place to see!A Brief History Agrigento was founded with the name of Akragas by the inhabitants of Gela in the 6th century BC. The city then became a very important centre in Magna Grecia. The spectacular and massive remains are still visible near the town. In 406 BC, the town was destroyed by Carthage, but rose again. Approximately two centuries later, the city was under the rule of Rome. After the fall of the Empire, Agrigento was taken over by the Goths and then the Byzantines in the 6th century. Under the rule of the Byzantines, the city declined.In 829, the Arabs took over, destroyed the city, and rebuilt it on higher ground.Ancient RemainsSeveral ancient remains of the city date back to the 5th century BC, including the temple of Concordia (Roman goddess of harmony), the temple of Zeus (leader of the gods and god of the sky and thunder in Greek mythology), the temple of Heracles (a.k.a. Hercules in Roman mythology). The temple of Concordia is one of the finest structures symbolizing Greek Classicism. The temples were strategically built on the peak of several hills around the city, which dominate the valley famed as Valle dei Templi. In the spring, this valley is known for a pleasant scent of orange flowers which are called zagare locally. Interesting Facts Agrigento is located in a province along with two very important towns known as Licata and Naro. Naro still contains well-preserved catacombs (also known as caves for burial) where the earliest Christians hid to worship. The poor village near Agrigento called the Contrada (defined as Chaos), is where Luigi Pirandello was born. He was probably the most famous Italian dramatist. He was also a novelist, and won the Nobel Prize for Literature in 1934.Interesting Places to See The Doric Temples in the Valle dei Templi, which date back to the 6th and 5th centuries BC, are ancient monuments dedicated to Hercules, Olympian Jupiter, Juno, Castor, Pollux and Demeter. These monuments have been amazingly preserved and are worth touring. The Tomb or Terone, the Oratory of Phalaris, the church of S. Nicola from the 13th century and also the 14th century Duomo are also spectacular sites. Economy of Agrigento A traditional agriculture of olives, almonds and sheep is the basis of economy for this city, whose population is around 55,000. Tourism is a great contributor to the city due to its significant archeological heritage and the coast nearby. For someone whos interested in learning about Greek history and mythology, Agrigento is a great place to visit. History is preserved for all to see.Written by Candice Pardue